Tax Return Problem Beth R. Jordan lives at 2322 Skyview Road, Mesa, AZ 85201. She is a tax accountant with Mesa Manufacturing Company, 1203 Western Avenue, Mesa, AZ 85201 (employer identification number 11-1111111). She also writes computer software programs for tax practitioners and has a part-time tax practice. Beth is single and has no dependents. Beth was born on July 4, 1972, and her Social Security number is 123-45-6789. She wants to contribute $3 to the Presidential Election Campaign Fund.

The following information is shown on Beth’s 2015 Wage and Tax Statement (Form W–2).

Don't use plagiarized sources. Get Your Custom Essay on
(Solved Homework): Tax Return Problem Beth R. Jordan lives at 2322 Skyview Road, Mesa, AZ 85201. She is a tax accountant with Mesa Manufactu…
Get an essay WRITTEN FOR YOU, Plagiarism free, and by an EXPERT!
Order Essay

Other 2015 transactions include the following.

Fees earned from her part-time tax practice totaled $3,800. She paid $600 to have the tax returns processed by a computerized tax return service.

Beth bought a used sport utility vehicle for $6,000 on June 5. She purchased the vehicle from her brother-in-law, who was unemployed and was in need of cash. On November 2, she sold the vehicle to a friend for $6,500.

On January 2, Beth acquired 100 shares of Blue Corporation common stock for $30 a share. She sold the stock on December 19 for $55 a share.

Beth records revenues of $16,000 from the sale of a software program she developed. Beth incurred the following expenditures in connection with her software development business.

Beth elected to deduct the maximum portion of the cost of the computer, printer, and furniture allowed under the provisions of § 179. These items were placed in service on January 15 and used 100 percent in her business.

Although her employer suggested that Beth attend a convention on current developments in corporate taxation, Beth was not reimbursed for the travel expenses of $1,420 she incurred in attending the conference. The $1,420 included $200 for meals.

Beth paid $300 for prescription medicines and $2,875 in physician and hospital bills. Medical insurance premiums were paid by her employer. Beth paid real property taxes of $1,766 on her home. Interest on her home mortgage was $3,845, and interest paid to credit card companies totaled $320.

Beth electronically contributed $30 each week to her church and $10 each week to the United Way. Professional dues and subscriptions totaled $350.

Beth paid $1,000 in estimated Federal income taxes throughout the year. She was covered for the entire year by Mesa Manufacturing’s health insurance policy.

Beth is anticipating significant changes in her life in 2016, and she has asked you to estimate her taxable income and tax liability for that year. She just received word that she has been qualified to adopt a 2-year-old daughter. Beth expects that the adoption will be finalized in 2016 and that she will incur approximately $2,000 of adoption expenses. In addition, she expects to incur approximately $3,500 of child and dependent care expenses relating to the care of her new daughter, which will enable her to keep her job at Mesa Manufacturing. However, with the additional demands on her time because of her daughter, she has decided to discontinue her two part-time jobs (i.e., the part-time tax practice and her software business), and she will cease making estimated income tax payments. In your computations, assume that all other income and expenditures will remain at approximately the same levels as in 2015. 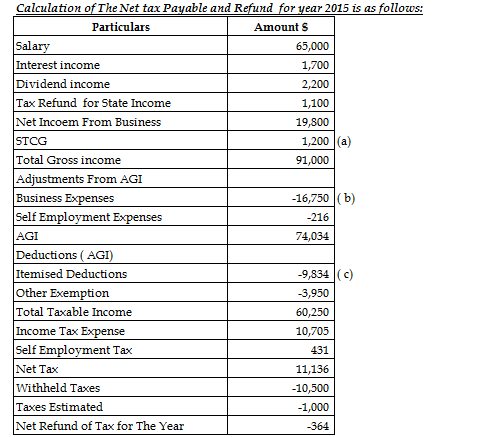 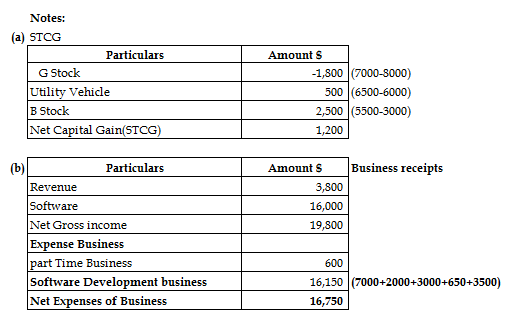 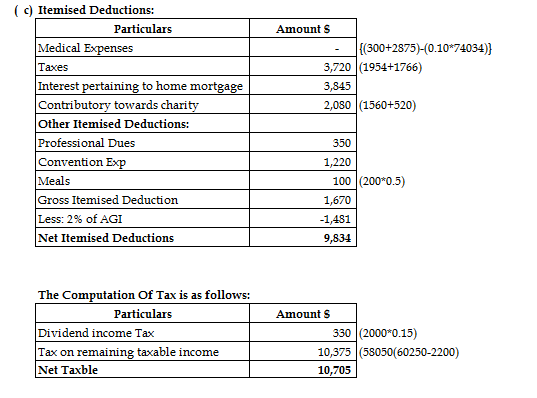