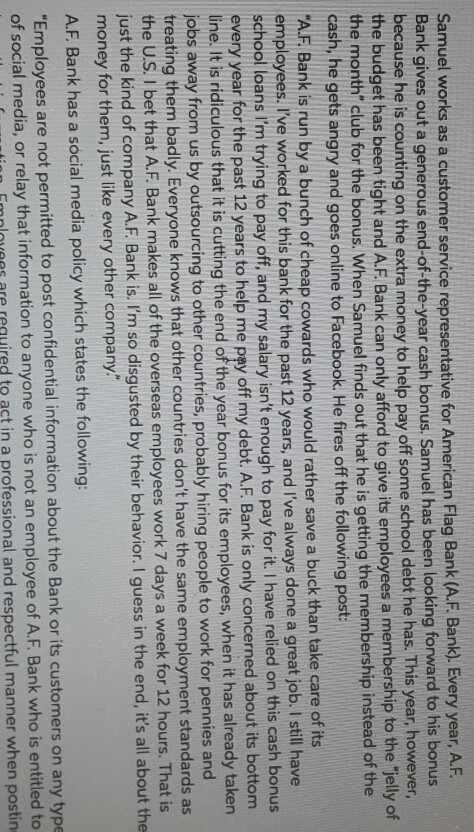 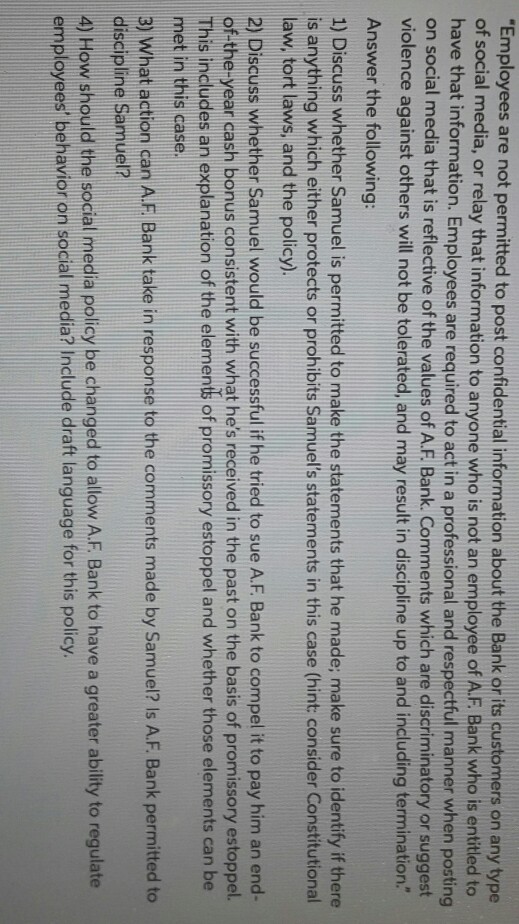 Don't use plagiarized sources. Get Your Custom Essay on
(Solved Homework): Samuel works as a customer service representative for American Flag Bank (A.F….
Get an essay WRITTEN FOR YOU, Plagiarism free, and by an EXPERT!
Order Essay

Samuel works as a customer service representative for American Flag Bank (A.F. Bank). Every year, A.F Bank gives out a generous end-of-the-year cash bonus. Samuel has been looking forward to his bonu because he is counting on the extra money to help pay off some school debt he has. This year, however the budget has been tight and A.F. Bank can only afford to give its employees a membership to the jelly of the month club for the bonus. When Samuel finds out that he is getting the membership instead of cash, he gets angry and goes online to Facebook He fires off the following post: A.F. Bank is run by a bunch of cheap cowards who would rather save a buck than take care of ts employees. I’ve worked for this bank for the past 12 years, and I’ve always done a great jo school loans ‘m trying to pay off, and my salary isn’t enough to pay for it. I have relied on this cash bonus every year for the past 12 years to help me pay off my debt. A.F. Bank is only concerned about its bottom ine. It is ridiculous that it is cutting the end of the year bonus for its employees, when it has already taken jobs away from us by outsourcing to other countries, probably hiring people to work for pennies and treating them badly. Everyone knows that other countries don’t have the same employment standarod the U.S. I just the kind of company AF. Bank is. I’m so disgusted by their behavior. I guess in the end,it money for them, just like every other company” b. I still ha bet that A.F. Bank makes all of the overseas employees work 7 days a week for 12 hours. That A.F. Bank has a social media policy which states the following: not permitted to post confidential information about the Bank or its customers on any type nk who is entitled to mnlovees are reauired to act in a professional and respectful manner when postin of social media, or relay that information to anyone who is not an employee of A.F. Ba

1) The statement made by Samuel is derogatory and is not acceptable according to the company’s policy. As per company’s policy it is not advisable to post any irrelevant post on company’s matters in public. This is also against the Constitutional Tort law especially if he works for the Government. Any government servant is prohibited to make substandard comments to the organization he is serving. Barring which, he shall be violated and imposed with heavy fines and loss of his job in certain cases.

2) Samuel will not be successful in trying to sue A.F. Paying off the school fees is certainly Samuel’s problem and not AF Bank’s problem. If an organization could not fare well in a particular financial year, it has right to cut down certain incentives it offers to its employees. AF Bank’s budget is tight, hence they have planned to issue “jelly of the month” club membership and access instead of bonus in that particular year.

Giving bonus or incentives to the employees is under the discretion of an employer. An employee cannot demand a particular incentive or any kind of a bonus from the employer. So, if Samuel has a problem with the company’s decision he can simply quit the organization. But he has no right to blame a company or pass on derogatory comments on the company in the social networking. In this case, his claim to sue the bank will not be successful.

3) AF Bank can take away Samuel’s job or simply give a warning to the comments he made on Facebook. Since it is against the company’s policy to post any kind of irrelevant post against the company, Samuel can be called for a meeting to solve the issue.

4) Social media should change its certain policies since there is no tab on the posts that are made on social networking media by its users. So, if the post is termed as a violation to the existing companies policies, and if that is derogatory, then organizations should request the social media to deny access to that particular individual.

Certain ways which can help to regulate such posts are –

AF Bank may, in its sole discretion, delete irresponsible content or content that is otherwise inconsistent with the purpose of the AF Bank social media channels; namely, dissemination and sharing of on-topic, appropriate content. To the extent applicable, AF Bank reserves the right to block any user that fails to follow these Terms of Use.