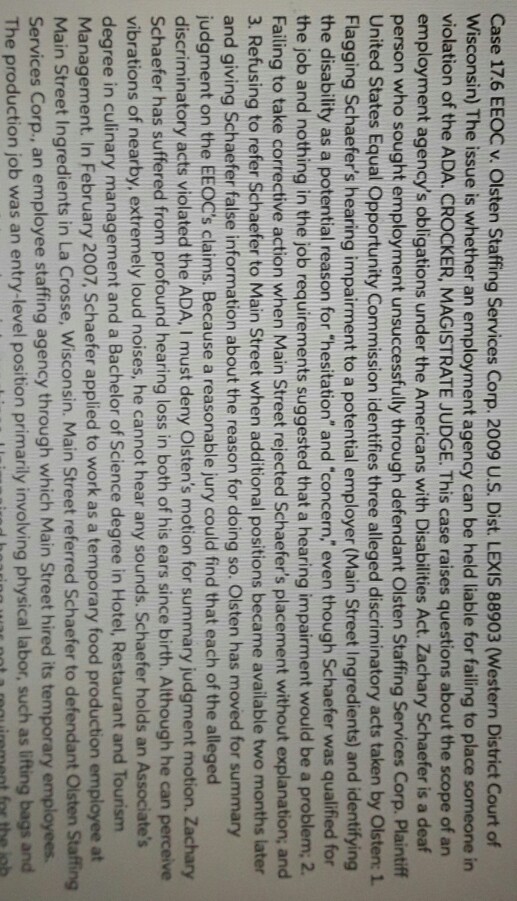 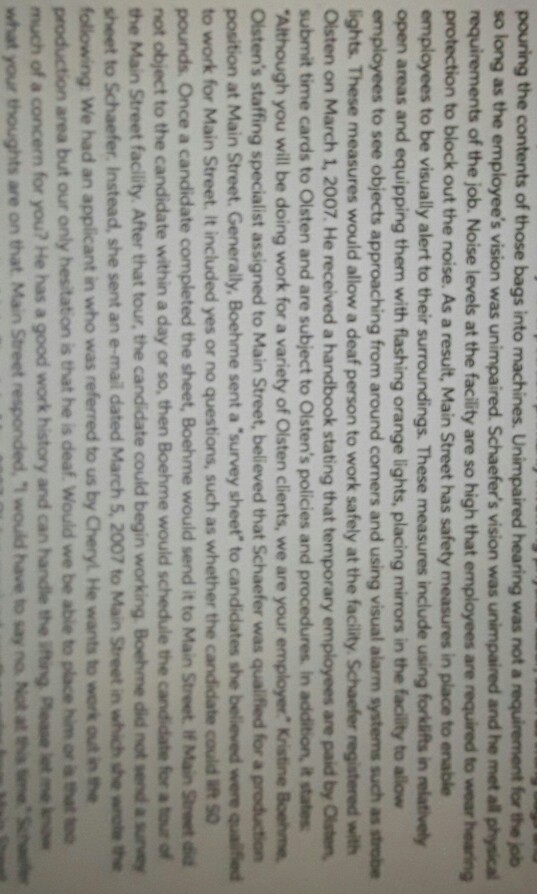 Don't use plagiarized sources. Get Your Custom Essay on
(Solved Homework): Case 176 EEOC v. Olsten Staffing Services Corp. 2009 U.S. Dist. LEXIS 88903…
Get an essay WRITTEN FOR YOU, Plagiarism free, and by an EXPERT!
Order Essay 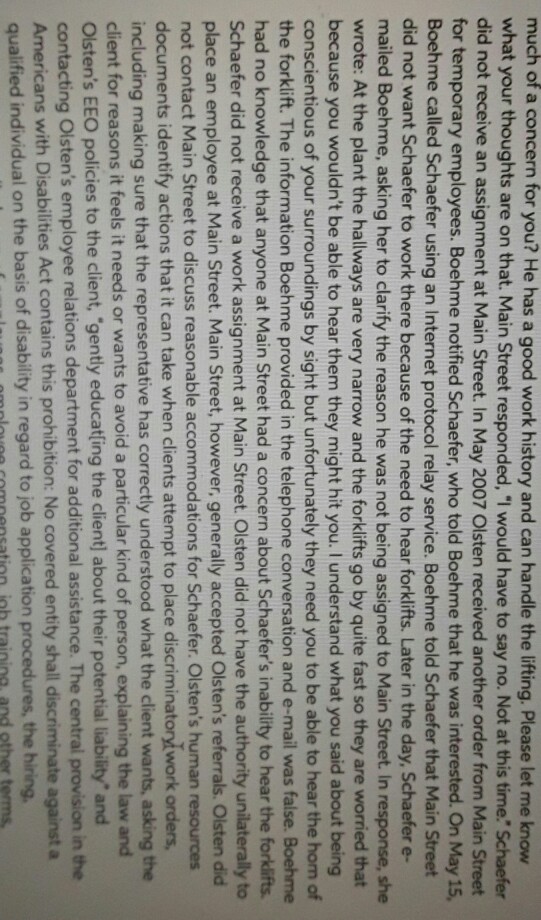 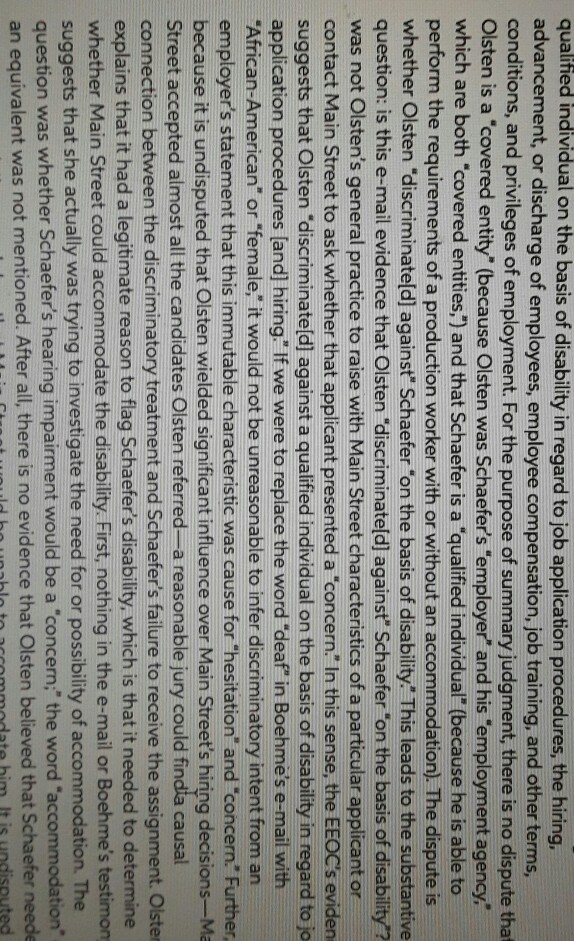 Case 176 EEOC v. Olsten Staffing Services Corp. 2009 U.S. Dist. LEXIS 88903 (Western District Court of Wisconsin) The issue is whether an employment agency can be held liable for failing to place someone in violation of the ADA. CROCKER, MAGISTRATE JUDGE. This case raises questions about the scope of an employment agency’s obligations under the Americans with Disabilities Act. Zachary Schaefer is a deaf person who sought employment unsuccessfully through defendant Olsten Staffing Services Corp. Plaintiff United States Equal Opportunity Commission identifies three alleged discriminatory acts taken by O Flagging Schaefer’s hearing impairment to a potential employer (Main Street Ingredients) and identifying the disability as a potential reason for “hesitation” and “concern,” even though Schaefer was qualified for the job and nothing in the job requirements suggested that a hearing impairment would be a problem; 2 Failing to take corrective action when Main Street rejected Schaefer’s placement without explanation 3. Refusing to refer Schaefer to Main Street when additional positions became available two months lat and giving Schaefer false information about the reason for doing so. Olsten has moved for summary judgment on the EEOC’s claims. Because a reasonable jury could find that each of the alleged discriminatory acts violated the ADA, I must deny Olsten’s motion for summary judgment motion. Zachary Schaefer has suffered from profound hearing loss in both of his ears since birth. Although he can perceive vibrations of nearby, extremely loud noises, he cannot hear any sounds. Schaefer holds an Associate’s degree in culinary management and a Bachelor of Science degree in Hotel, Restaurant and Tourism Management. In February 2007, Schaefer applied to work as a temporary food production employee at Main Street Ingredients in La Crosse, Wisconsin. Main Street referred Schaefer to defendant Olsten Staffing an employee staffing agency through which Main Street hired its temporary The production job was an entry-level position primarily involving physical labor , such as lifting bags and

1) “Olsten’s handling of Schaefer’s application violated the ADA.” I completely agree with the court’s decision on violating the ADA. Since Schaefer’s disability to hear was not a mandatory pre-requisite for the job he is applying, yet he has been denied of the employment just because Olsten did not present the facts before the Main Street nor referred the employee on the basis of his ability to lift weights. He was purely judged on his inability to hear, which was not to be considered as an inability to work due to his disability. This purely violated the rules of ADA.

2) Olsten flagged Schaefer’s disability may be because permitting a case like this one to go forward may create a negative impression on Olsten if Schaefer could not do well in the job. There is also a possibility that Olsten might have thought that any kind of controversy due to Schaefer’s inability to hear can create ripples in the Olsten’s and Main Street’s relationship. Thirdly, there could be a possibility that Olsten does not like Schaefer personally. Hence they tried to cook a story on Main Street’s decision of not providing employment to Schaefer.

3) If the case goes before a jury, then it would be against Olsten and in favor to the Schaefer. Since Schaefer has fulfilled all the necessary requirements, yet he has been denied of the employment due to his disability which was against ADA. Hence Olsten has to face the charges for misleading Main Street and for discriminating against Schaefer.