(Solved Homework): Can you please answer this? According to Airlines for America, there have…

Can you please answer this?

According to Airlines for America, there have been approximately 51 airline mergers/ acquisitions since 1930. Although this is not necessarily a verifiable number, it does show the magnitude of the consolidations that have taken place in the passenger airline industry. Probably the most significant combinations of carriers began in 2009 with Delta and Northwest, followed by United and Continental in 2010, Southwest and Airtran in 2011, and American and US Airways in 2013. These four “mega-carriers” account for approximately 80 percent of all domestic airline passengers today.
The Airline Deregulation Act of 1978 was intended to open the passenger market to new entrants to increase the level of competition. Since then, however, there have been no new entrants into the traditional hub-and-spoke airline market. While there have been a few successful entrants into the market (for example, Southwest), they were point-to-point airlines that did not compete against the legacy hub-and-spoke carriers (for example, United).
CASE QUESTIONS
1. Based on publicly available data, compare the four mega-carriers across the following characteristics:
a. Number of aircraft by type; b. Number of employees; c. Departures; d. Revenue passengers;
e. Revenue passenger miles; f. Available seat miles; g. Operating revenue (total); h. Operating revenue per seat mile; i. Operating profit.
2. Knowing the intent of the Airline Deregulation Act of 1978, explain why the number of passenger airlines in the industry has actually decreased. Be sure to include a discussion of barriers to entry in your explanation.
3. With the total U.S. market being oligopolistic in nature and at some hubs monopolistic, should the federal government take steps to impose economic regulation on the passenger airlines again? Explain your opinion.
4. In your opinion, why did the Justice Department allow such consolidations to take place?

Don't use plagiarized sources. Get Your Custom Essay on
(Solved Homework): Can you please answer this? According to Airlines for America, there have…
Get an essay WRITTEN FOR YOU, Plagiarism free, and by an EXPERT!
Order Essay 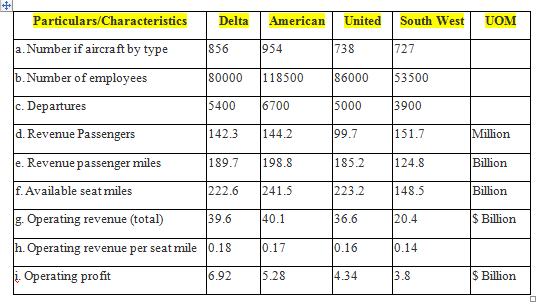 2. Airlines have decreased in numbers on account of many reasons:

Consolidation in Industry: Generally, for all players to achieve a slightly better return than the market rate of return, the structure of airlines invariably shifts towards oligopoly.

High entry Barrier: A single A 320 costs around $120-130 Mn. The cost of aircraft, maintenance, manpower and other similar factors ensures that other than capital costs, it also requires a reasonable good working capital. High entry barriers also ensure that exit barriers are also equally high.

Airlines industry has over the years has become a stable industry. The growth of the customers is also predictable and current capacities are sufficient to take care of future loads. Airlines become profitable only when the load factor is above a certain level. Airlines operate close to that. Sometimes, a single seat or two makes the difference.

Hence, entry of another new airline can put the old players as well as new one in deep losses. Hence, the competition structure remains more or less same across the industry.

3. As mentioned above, the airlines are hardly above breakeven load factors. If one a few routes, they are making money, it is quite possible that a few other routes may be getting subsidized. However, if there are extreme violations, the government may have to act. In an ideal situation, it’s always recommended to let demand and supply forces ensures market structures.

4. The justice department allowed such consolidations to take place because of the following:

a) Externalities -Given that airline companies, would have operated independently, it would have led to negative production externality. In order to eliminate, such problems (where property rights are not defined), consolidation proves fruitful.

b) Social wastage of resources – Given, that companies produce independently, each will have to incur great costs, and economies of scale would not be achieved.

If you liked my answer, please provide thumbs up and your comments are appreciated!